On june 29th there is the official reopening of “Strada dell’Assietta” Road, a unique road, all over 2000 mts through the history of its battle and military forts 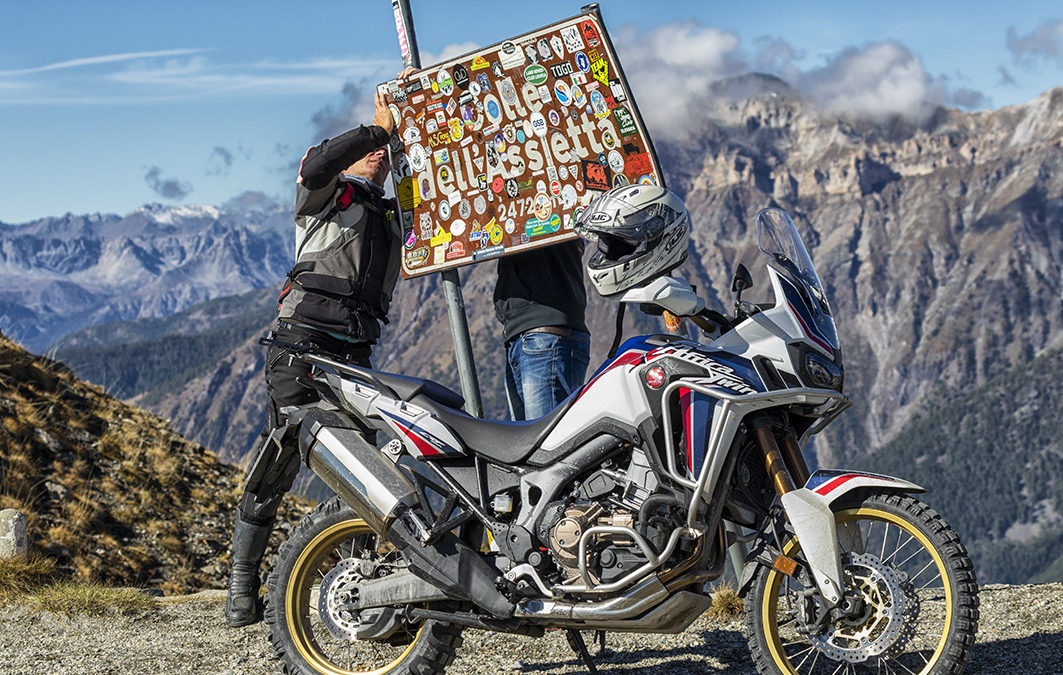 USSEAUX – Finally, the awaited reopening to the motor traffic of SP173, la Strada dell’Assietta has been decided: June 29th, a bit later on the scheduled time, because of the snow and ice at high altitude. The reopening to the traffic was planned on Saturday June 15th, but the bad weather conditions and the low temperatures of the beginning of June over 2000 mts of altitude, had caused a dangerous situation in which the dirty road had large tracts covered with snow or ice. At the end of the last week the snowpack still reached 1 metre and a half. Meanwhile, the road workers of ex Turin province viability service have worked hard to repair and adjust the road, by improving the dirty parts and levelling using quarry materials, to create a regular road surface.

The regulation: the road is closed on Wednesday and Saturday until the end of August and for shows and events.

Also for this summer season 2019 Città Metropolitana di Torino has promulgated an ordinance to regulate the traffic during July and august . The SP173 will be closed to the motor traffic from 9 a.m. to 5 p.m. on wednesdays and Saturdays from Pian dell’Alpe (Km 36) to the limit of Sestriere  municipality (Km 6+900).

Here is the exact timetable of the traffic block of cars and motorcycles:

During the open days there is a traffic restriction with maximum speed limit of 30km/hour ( 17 miles an hour), the prohibition on transit to vehicles with mass over 3,5 tons, and to vehicles having a maximum width of 2 meters, the overtaking and parking ban outside of the parking areas.

Unless early snowfallings which will oblige to an early closure, the winter closing to the traffic is scheduled from November 1st2019 to June 30th2020.

A beautiful “ride” all over 2,000 meters along the watershed between the High Valley Susa and Chisone

The SP173 road of Assietta begins at Pian dell’Alpe in Usseaux in High Chisone Valley and after 36 kilometres arrives in Sestriere.  It is also possible to descend on a dirty road towards Sauze d’Oulx. The road is almost entirely over 2,000 meters of altitude, offering to motorbikeand cycling enthusiasts a unique panorama of Susa and Chisone Valleys and the nearby French Alps.  From Pian dell’Alpe the road climbs gently passing at the foot of Cima Ciantiplagna (2,849 metres), Punta Vallette (2,743 metres), Gran Pelà (2,692 metres) and Punta Gran Serin (2,629 metres).

Halfway around, after the monument, the Rifugio Casa Assietta, in an old provincial “cantoniera” house is open during summertime. 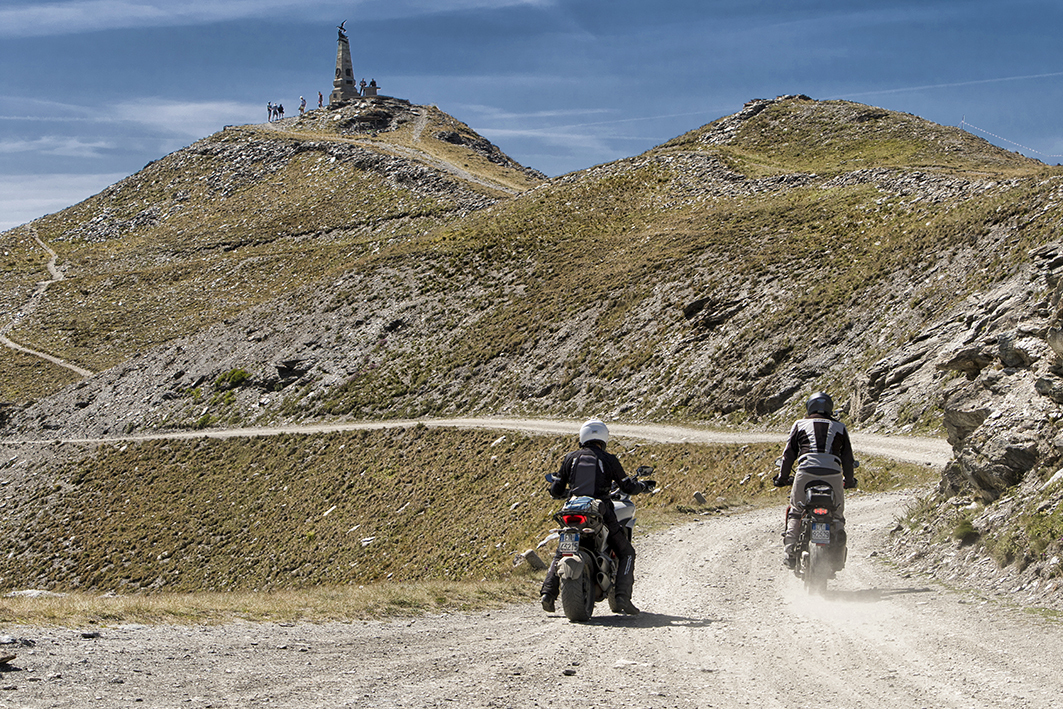 On July 21st The Piedmont party in Assietta, with te historical reenactment of the battle of July 17th, 1747: a not to be missed event coming back to the epic history of these places: the Assietta battle

On july 17th, 1747 there was one of the most legendary epic battle of the history: The battle of Assietta,on the watershed crest on the track of the modern Assietta’s road. In Europe the bloody austrian war of succession was going to finish. Maria Teresahad taken the throne of Emperor Carlo I,not respecting the law that gave the throne only to male’s heirs. It was an excuse, but it was enough to start a war that lasted for 4 years.

The small Sardinia reign was allied with Austria and consequently a French enemy.Piedmont was invaded several times, but its army was able to stand up to the enemy troops even if they were numerically superior. But the final battle still had to be fighten. Spanish-french troopsattacked the Savoy reignfrom Liguria, and then passed secretly the front towards Monginevro hill. But the king Carlo Emanuelenoticed it in time and ordered to Marquis Balbiano, the governor of Susa, to prepare a defensive plan providing to  collect the troops in the strategic Assietta’s plateau. The two valleys, Dora and Chisone, had been annexed to Sardinia’s reign a short time before and their forts ( Exilles and Fenestrelle) had been inherited from Dauphiné,enpowered by the military engineer Ignazio Bertolaand adjusted to the new borders. The control of Assietta meant to control the two forts and Piedmont couldn’t absolutely loose them. Piedmontese, despite the exiguity of forces to oppose the enemy, knew that could have been exploited the advantage that the terrain offered in case of frontal attack. So the Assietta was fortified with defensive entrenchments and small fortresses. On July 14thFrench Spanish troops arrived in Brianconand on July 16ththey passed the Monginevro border driving up their artilleries from Oulx to Col Blegieralong a hard mule track ( the Cannons road, today only a track ).

In Assietta general Cacherano di Bricherasiocould count on less than 7400 soldiers, piedmontese, austrian, swiss and volunteers from the valleys deployed in a semicircle between Gran Sereinand Assietta’s topin a range of 1 km and a half. French, led by general the duke du Belle-Isle, the French marshal’s brother, were more than 21000, divided in 40 Battalions, equipped with artilleries.

At ten of clock in the morning, on July 19th1747, the battle started. French started the advance with strength. Piedmontese let them get closer and then started a violent barrage against them. French, after having opened the fire of artilleries, at 4.30 p.m. started a violent attack, in front and along the side, on three strong coloums. The attacks against Assietta’s plateau were fighted off from piedmontese rifles. French, decimated, must retire messy with heavy casualties.

The central coloumn assaulted the pincer of the Assietta’s top, and arrived at a few hundreds of meters.

The assault was made with vigour: but the heroic defence of Grenadiers of the first Guards battalion,then reinforced by the Casale regimental Grenadiers brigade, stopped the assailants’ impetus. During the long night Piedmontese, exalted until heroism by their Commander, The Earl of S. Sebastiano’s conduct, didn’t retreated, though threatened from all sides.

Belle-Isle, grasped a flag, threw himself in a desperate assault to drive his soldiers, but he was wounded twice and killed by a third shotgun. Despite the death of their Commander French insisted with the assault, but Piedmontese Grenadiers, deprived of any munition, always standing on the barricades, fended off French with stones killing them at random.

At sunset, the entire french army was defeated and fled in disorder, leaving their death and wounded soldiers to Piedmontese.The loss in this incredible battle, the highest ever fighted in Europe before the first world war, were enormous for French: 5300 soldiers, 439 officers, 2 generals, 5 brigadiers and 9 colonels. Piedmontese had only 7 officers and 185 soldiers dead, Austria had only 2 officers and 25 soldiers. 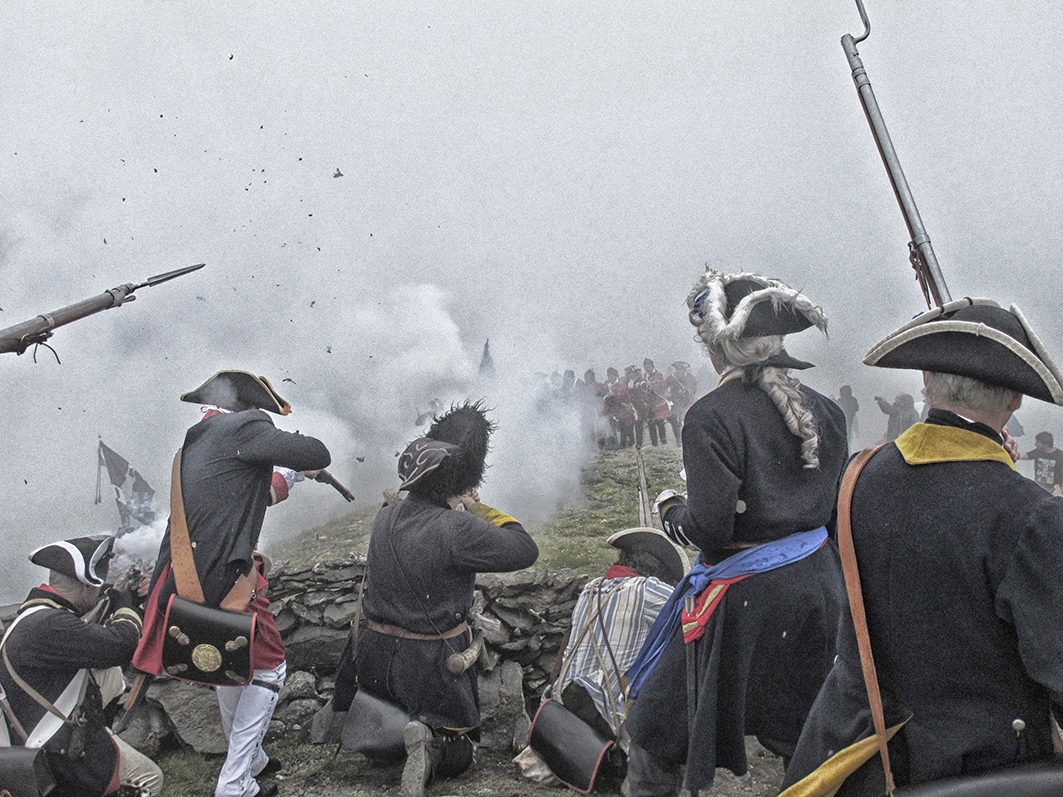 The date of July 17thentered the history becoming a symbol of Piedmont and its inabitants symbol. In the post war period The Piedmont Region and the other civil and military institutions remember that date with a ceremony together with a group of fans who recall the military history coordinated by the Festa dël Piemont al Col ëd l’Assieta association. They organize a day with an historical revival of the most important moments of the battle and visits to the battlefield looking for the traces and the memory of those epic and tragic events.

This year the feast is planned for the third weekend of July, according to the programme published forward.

A different and unique occasion to drive along this road and the glorious history of this walled mountain. 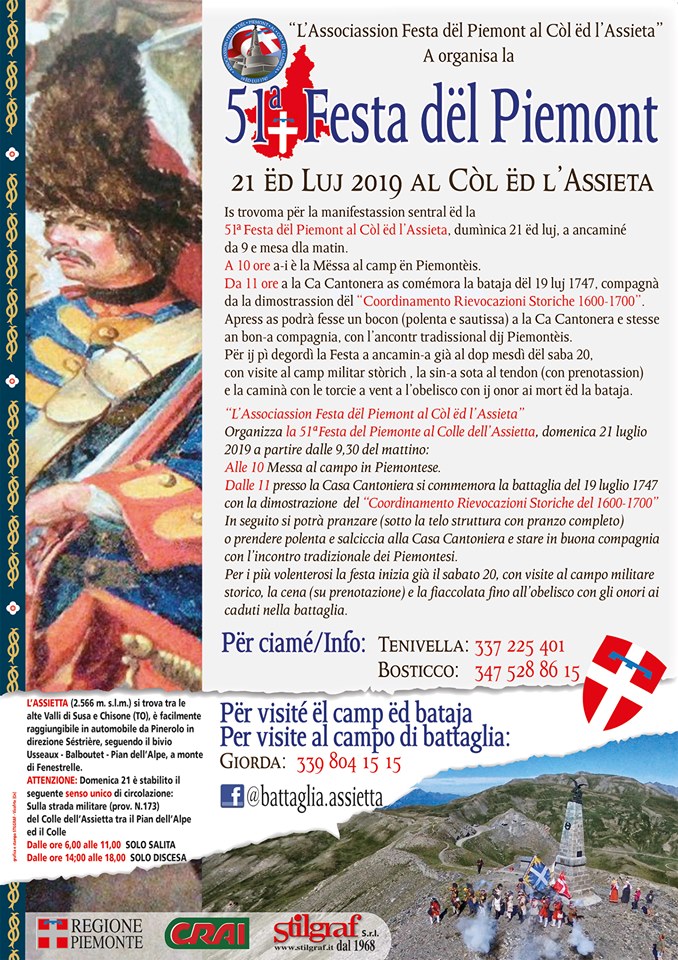