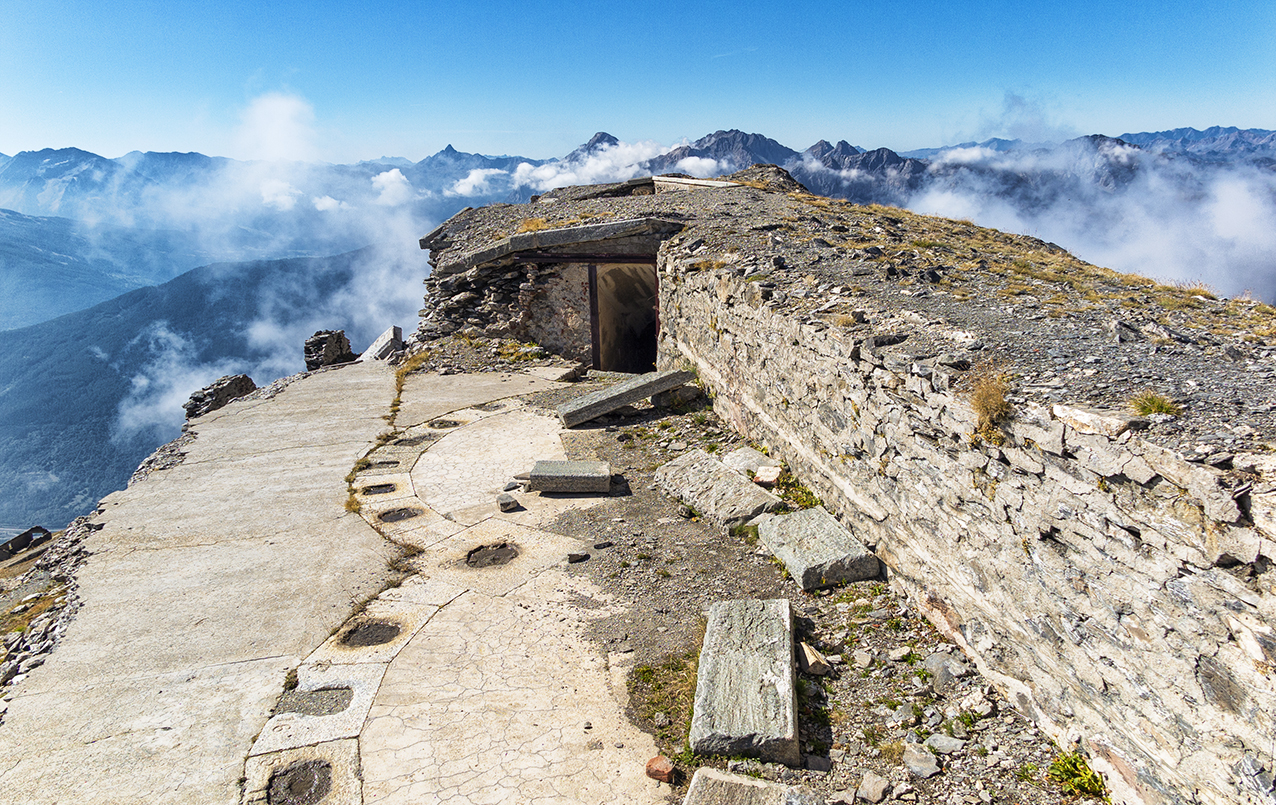 The real jewel and the main characteristic of the “military road 79” is the spectacular PRAMAND TUNNEL, known as “GALLERIA DEI SARACENI”,  876 metres long and excavated in round a corner under the MOUNT SEGURET’S steeples between the two world wars.

The popular name of the Galleria dei Saraceni  comes from the typical carsic caves excavated in the limestone above. The structure is 876 meters long, excavated in in U-shape, unique in all west Alps.

The tunnel excavation began in 1924 and took 4 years of work, until 1929 and it was necessary to protect the suitable roads from the fragility of the hillside made of pure dolomite rock, caused by the rocks and debris falling coming from the cliffs above and waters’ fallout.

From the COLLETTO PRAMAND’S ESPLANADE, 2087 mts high, turning left after about 1,4 kilometres, after a short climb you can arrive to PRAMAND’S BATTERY ruins, 2106 metres, with its revolving towers: an incredible viewing point on High Susa Valley and french Meije and Ècrins at 4000 metres.

From here you can go back downhill from the same road to Colletto Pramand and then drive on the main road in west direction, cutting the rocky sides of Mount Seguret, 2926 metres, and passing through a first small tunnel excavated in dolomite’s rocks you can arrive at the east entrance of incredible “Galleria Seguret”.

The tunnel is completely dark, except the first part where, on the left side in the beginning of the first world war was built an emergency exit in case of landslide.

The reinforcement roadworks made inside hasn’t entirely avoided water infiltrations, so it’very important to drive carefully, expecially after the first half of the tunnel.

The exit is very spectacular: reached the ruins of SEGURET’S ARMY CAMP, after the military stone n.14, you can see Seguret’s hillside behind, the Pramand’s spur and a view on Assietta’s ridge on the opposite side of high Susa Valley.

Driving for a kilometre you cross the road arriving from Bardonecchia towards Fort Foens. The military road was built to reach every fortified military post defending the land.

In a day you can drive through a complete ring, once reached JAFFERAU FORT, with a very technical and steeply descent, expecially in the first part, on a modern track along Bardonecchia- Jafferau ski slopes, not suitable to all vehicles and then turn back to FORT FOENS and through the tunnel or on a dirty road descending from Alpe Roche’s wood in Savoulx, in Oulx land, reaching State Road n. 335. Alternatively, depending from the motorbike you drive, you can reach Jafferau and then, arriving at the junction, descend and drive to Bardonecchia via Fort Foens. The choice depends from time and forecast. 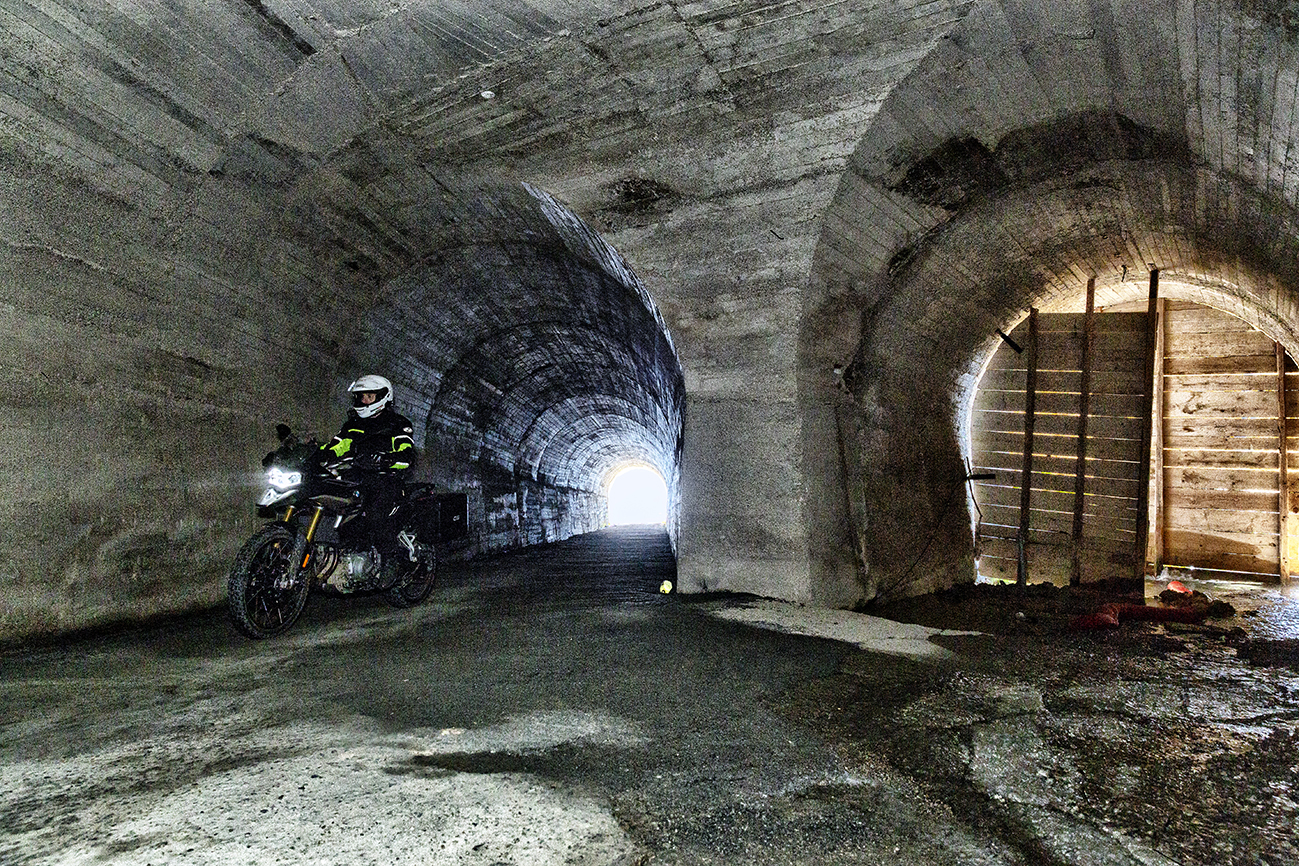 From the crossroad at 2316 metres you can climb with a moderate gradient until an hairpin where you can have a wonderful view on the road coming from Colletto Pramand and the sheer wall of the Saraceni’s caves, then you can drive on a long and steep stretch of road coasting and coming back in west direction to arrive to Col basset– junction Colletto Vin Vert. You drive along some closed hairpins and then a long straight in east direction on a grassed hillside until the last hairpin, 180 degrees and with a steep climb you reach Col Basset ( 2596 m), on the ridge with Val Freddaand Monte Vin Vert( 2711 m) in east direction and Rocher de l’Aigle( 2683m) in west direction.

From this panoramic point, the road continues in Valle Fredda’s side, behind the rocky ridge in the north called Rocher de l’Aigle. Passing the km 19 keep attention to the snow or ice expecially during autumn or in the beginning of summer. You reach in this way the Colletto near the BARACCAMENTO COLLETTA JAFFERAU, a barrack which hosted 200 people- from which you can see a wonderful landscape on the Rognosa D’Etiache and on the last part of the Sommeiller road, at the base of the ramps climbing to the fort, well visible from there. The road surface in this point is already made by stones arranged in knife way, so the driving in the last 5 hairpins becomes very technical. Suddenly, after the last ramp, you can reach the small esplanade on the north ridge of the top. It’s possible, safely, to arrive to the esplanade on the top where there are the ruins of FORT JAFFERAU at 2805 metres.

The real fort was built between 1896 and 1898 and you can see the 8 cannons sites on the fort top with the indication of the tracking corners and the ready lockers below. Of the boundary wall it remains only the front gate where there was the drawbridge.

Now that Chaberton is in France, it is the highest Italian military fort, unfortunately bombed and blown up to obey to Paris treaty in 1947.

The sight on the summit is unique and in the coldest days with clear sky you can discover a 360°-degree view from Monviso,to Pic de Rochebrune, to Chaberton at 4000 metres in France and over Bardonecchia’s basin 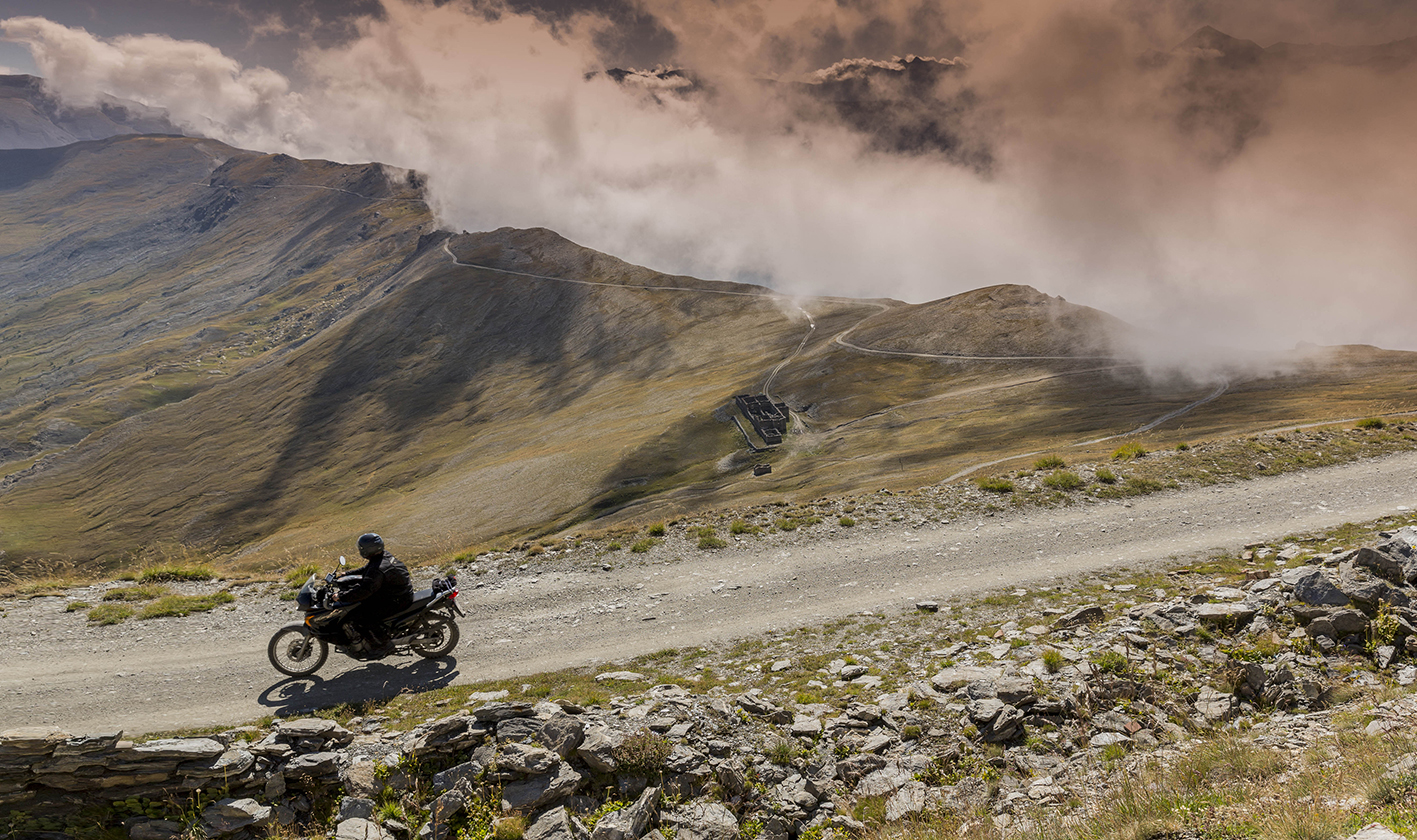 To go to Bardonecchia you can choose to come back from the road you have driven along or take the driveway through the winter ski slopes direction, down to BARDONECCHIA – BACINI FREGIUSIA. The first strectch of road to the cable car’s arrival is a sheep trail, steep and counterslope that must be driven very carefully also with endure motorbikes.
There is a very sharp zigzag track under the chairlift Testa del Ban.  The fort there had been intended to be a defensive barriage bastion that’s’s why no way down had been provided, neither with mule tracks.

Driving down the gradients are more affordables and the road goes in left direction entering the coniferous forest after you have passed under the new 6 seater chairlift “ 6 Gigante”. At 2000 metres the road is almost flat, near Belvedere and Jafferau hotels to reach “Bacin Fregiusia” at 1900 metres where begins also the ex railway called Decauville, a road that joined this place to “Rochemolles dam”with a service railway built in thirties. Attention: this stretch of the road is forbidden to motor vehicles!

After the pipeways you can choose to go down straight to Bardonecchia passing through the nice villages of Broue, Rochas, Cianfuran, then Gleise and finally Millaures, arriving in Bardonecchia’s center, or to proceed in your adventure on dirty roads. 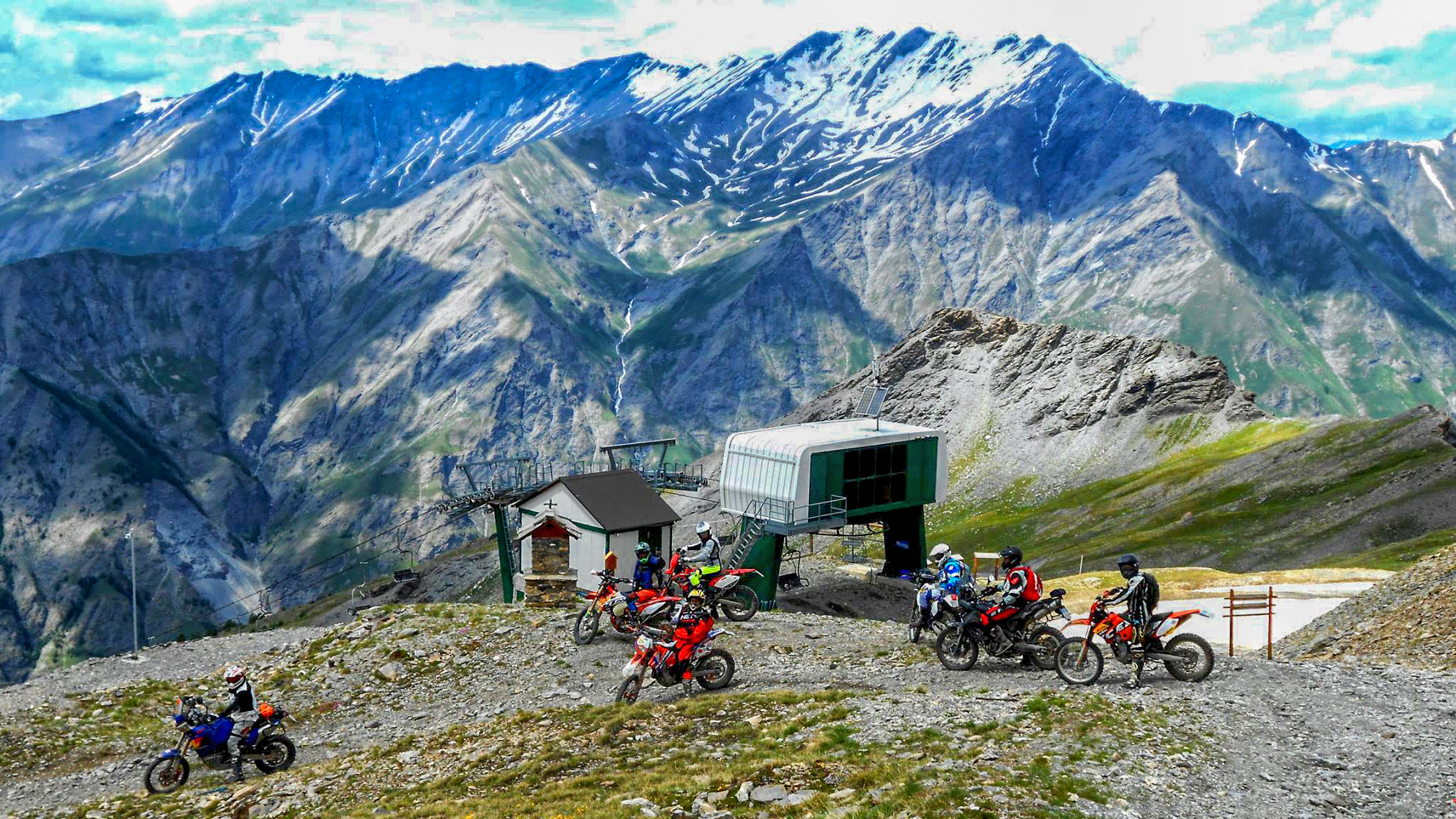 The destination called “Bacini” takes its name from two big water tanks supplied by the lake formed by Rochemolles’ dam, through a long tunnel. From the basin start two pressure lines feeding the power plant of Bardonecchia, built between 1918 and 1923 by the Italian railway state company Ferrovie dello stato ,then sold to Enel, the electric state company, in 1968. After 100 meters, if you don’t go down to the crossroad, you can climb on the left in east direction. You climb hard hairpins to about 2100 meters of altitude, then the road becomes a flat after a big fountain, crossing a landslip contained by environmental engineering works and driving in a flat road you arrive at the entrance of FORT FOENS, 2216 m. of altitude.

This fort was built from 1897-98 and it’s in a flat area completely surrounded by a defensive wall. The proper fort was a rectangular in shape, armed with 4 mortar positions, 4 mortars with the mouth of fire towards Bardonecchia’s basin. Near it hosted 2 cannons pointed towards the Grand’Hoche and the Bardonecchia’s Dora river’s outcome in the Dora Riparia river near Oulx municipality.

From the fort you drive, in a soft climbing, touching the old Costans-Jafferau’s cable car station’s ruins which served the fort from the valley floor, then you arrive at the junction going down to Savoulx.

Now it’s your choice: to continue in east direction where after 3 km you can come back to the junction in ex military road 79, descending to the valley retracing back the tunnel and the climbing route, or turning right in a steep descent about 1000 meters of gradient and 13 kms to reach the asphalted road near Savoulx, half the way between Oulx and Bardonecchia, on State route 335 near the highway A32 exit. It’s a semi-private road built in the second postwar period.

Before entering in one of the most important larch forest of all Susa Valley, rich of colours especially during the fall, you can reach the Chapel of Madonna delle nevi and the Roche pasture at about 1900 metres. Then, after a long path, the dirty road continues with 17 tight hairpins until the village of Savoulx, when you find the asphalt again.

The Saraceni’s tunnel was driven in advance at the end of October 2018 by our friends journalists of ROADBOOK who realized this video-adventure along the entire route, well described on their website and on the Roadbook magazine n.10 of February-march 2019 in a wonderful report.